What are Software Metrics?

Software development metrics are quantitative measurements of a software product or project, which can help management understand software performance, quality, or the productivity and efficiency of software teams.

What is Software Quality and How Can Metrics Help?

Of these four, performance is probably the one that is easiest to measure. The other three are tricky to quantify and while metrics exist, they do not show the complete picture.

Metrics in the Software Development Process

The agile methodology has a unique approach to software development metrics and how to use them effectively. Leon Tranter presents three agile principles for software metrics:

In traditional waterfall software projects, it was assumed that software could be specified in advance and quantified by estimates. It was also assumed that the software specification would meet end-user requirements (which often was not the case).

This led to an emphasis on in-process measurements like man-months or active days, Lines of Code (LOC), and even number of pages of documentation. In agile development projects, the emphasis is on outcome metrics like story points completed, production defects or customer satisfaction.

We chose the metrics below as our top 5 because they provide direct information about the experience of the end user: their satisfaction, the rate at which they receive new features and new versions, the number of bugs they experience, and the degree to which their important functionality is tested.

A widely used and respected metric for customer satisfaction is Net Promoter Score (NPS). It a number ranging from -100 (indicating no customers refer you to others) to +100 (all customers likely to refer you to others). SurveyMonkey provides the full calculation for NPS and lets you set up a free NPS survey.

Team Velocity measures the number of story points, quantifying the number and size of product features, completed by the team in the previous sprints. It helps to understand how much value the team is providing to customers in a given time period. Example: If a team completed 15, 20, and 13 story points in the last three sprints, the average velocity is 16. This is the expected output of the team in the next iterations. It’s important to only count story points towards velocity if they were “done-done” according to the team’s Definition of Done within the sprint.

A Release Burndown chart can help you understand, across an entire software release, how development is progressing, how much of the planned software functionality remains to be done, and when you can expect the release to be completed.

Example: The image below, taken from Atlassian’s JIRA software, shows the power of the release burndown chart. It shows that over four sprints the team has reduced the number of stories to be done from 43 to 26, and predicts that the release will be completed in 7 more sprints.

This metric checks, per release or product component, how many bugs or issues were identified after the software was already in production. This is a good indication of quality as perceived by the end user. If it’s increasing, it is a sign of a faulty quality process. We call this metric true test coverage as opposed to the regular test coverage metric, which only measures unit tests. This is a metric that tells you how much of your codebase or feature set is covered by all types of tests—unit, integration, UI automation, manual tests and end-to-end acceptance tests. It can reveal quality gaps—parts of the software that are new or actively used but do not have sufficient test coverage. 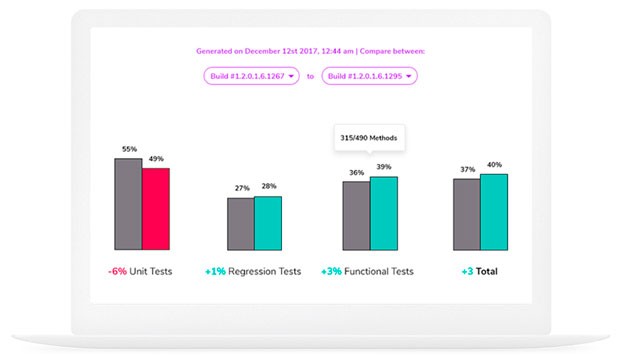 In our list of metrics above, you might have noticed that True Test Coverage is a new one which you might find difficult to compute on your own. In complex software projects with millions of lines of code and numerous test frameworks, collecting the data for a holistic test coverage metric is a major challenge.

This is where Quality Intelligence technology comes in—tools that provide visibility for development managers, by monitoring tests across all test frameworks, collecting test execution data, and correlating it with data about code changes and frequently used features. This can help compute a True Test Coverage metric which can expose quality gaps in a software product.

SeaLights is a quality intelligence platform that helps visualize test gaps and quality trends. For example, it can tell you if a software component suffers from quality risks, and where teams should focus to improve quality.

This is how SeaLights visualizes the number of methods in the code that were recently modified, or are used in production, and are not tested. To learn more about the missing quality metric that can dramatically improve control and efficiency in developer projects, read our white paper.